A Brief History of the Axe Estuary 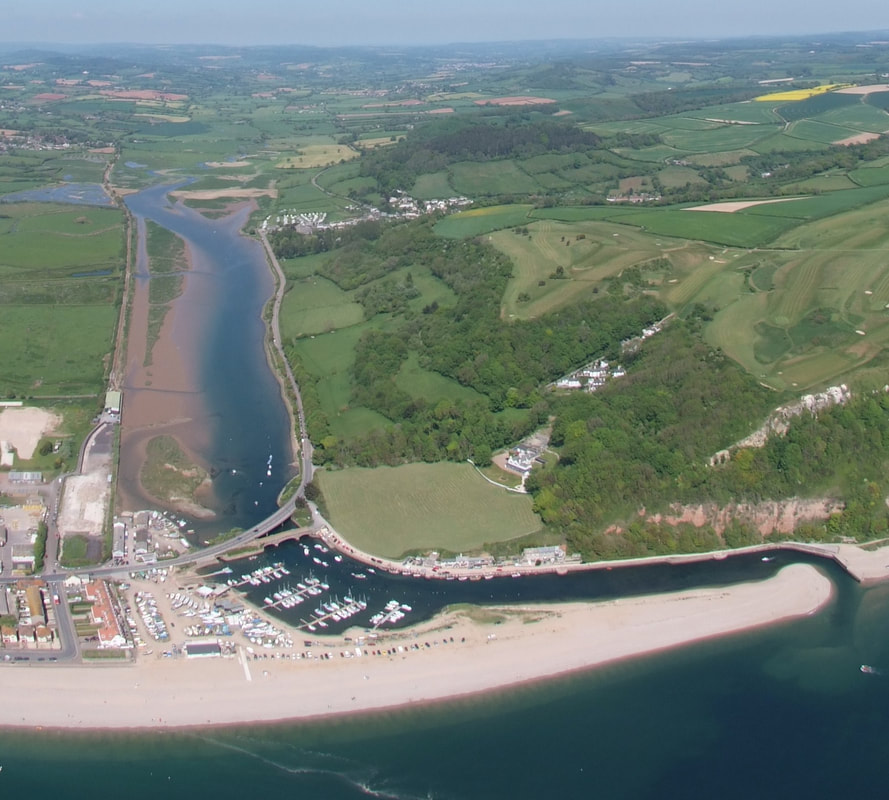 Written by David Walters (... and updated by Doug Rudge)
with acknowledgements to a paper published in the ‘Transactions of the Devonshire Association’ by Margaret Parkinson, 1983

In Roman times, the mouth of the Axe was nearly half a mile wide, and the whole of the valley was tidal, and the river was an important “Haven”.
From 850 – 950 AD, the time of frequent Danish incursions, it was still an open estuary, and quite large ships navigated to Stedcombe, North of Axmouth, (where Sted­combe house now is) which can be translated as “The landing place near the valley.”

The high ground North of St. Gregory’s Church was another landing dock in Seaton and was known until very recently as “Merchants Roads”. That name is still echoed by Merchants Lane, near the recycling centre.

In 1346, Seaton was still a port, but shingle movement from West to East probably started about 1350, and completely or partially blocked many rivers in East Devon and Dorset. Indeed, it was reported that the River Otter was “Clean Barred” by 1450. By 1450, work had begun on a new harbour, and many desperate attempts were made to keep the river mouth open for shipping, but all were doomed to failure. (Shades of the King Canute legends!) Even as late as 1982, improvements costing millions were considered. As the river mouth narrowed (indeed at one stage it was completely closed, with water percolating under the shingle to get to the sea), the effect of the tide was much reduced, resulting in rapid growth of salt marshes from Seaton right up to and beyond Colyford.

In 1659, plans were made for a reclaiming bank to stop the constant flooding of the salt marshes, and work was begun in 1660.

Around 1700, salt making in the estuary was re-introduced, nearly six centuries after it had apparently ceased. Salt water was evaporated in “Pans” – shallow scrapes lined with clay – and when sufficiently reduced, removed by buckets and boiled. It took approximately 50lbs of brine to produce 1 lb of salt. (This industry is remembered by Salt Pan Lane, the road that leads to the sewerage works and Seaton Marshes Local Nature Reserve.)

At the beginning of 19th century, a family named Hallet – who had made their money from the Slave Trade – built Stedcombe House, and set about making improvements to the harbour mouth. There was some success, and a pier was built which enabled ships of up to 100 tons to load and unload and there was a regular weekly passenger boat to London. In 1869 a huge storm destroyed the pier, but it was not viable to rebuild it, as the previous year the railway had opened.

During the 19th century, the drainage of the field known as Little Ragged Jack was improved by cutting ditches, and laying some 200,000 tiles – expensive grazing land to be sure.

In order to bring the railway to Seaton, the reclaiming bank had to be raised by about 3 feet, and widened by about ten feet. As to take soil from the western side would have interfered with the drainage schemes, it was taken from the eastern side, creating the tidal creeks close to the bank on the river side. The Axmouth Bridge, reputedly the first concrete bridge in Britain, further restricted the tidal flow, resulting in the relatively meagre rise and fall we see today. The bridge was opened in 1877 as a toll bridge, but the “Road” to Axmouth was still a mud track, very much liable to flood­ing. The toll was removed in 1907, but the Great War. interrupted plans to improve the road, and it was not until 1924 that the riverbank was raised, and the present road along the east side of the river was constructed.

In 1966, the railway closed, thanks to the Beeching report, and shortly afterwards, the Seaton and District Electric Tramway was formed, which, as we know, is still operating very successfully today. In 1968, there was a serious proposal to create a Marina, re-flooding the marshes almost up to Stafford Brook, but the combination of huge costs, and equally huge outcry from local residents resulted in the plan being dropped. This was the time when The Axe Vale and District Conservation Society was formed, with aims of protecting the wildlife and environment – a role it still has, and the present Seaton Development Plan is under close scrutiny.

In 1980, a new sewage works was required, and in order to protect the site, a flood bank was constructed from the tramway right up to Merchants Lane. Some of the soil required was taken from what is now known as The Borrow Pit. The Axe Vale and District Conservation Society was quick to realise potential of this area, and acquired the lease to form a small nature reserve.

In 2001, part of Seaton Marshes was acquired by East Devon District Council, and formed into a Local Nature Reserve, with ongoing management steadily increasing the number of birds finding it attractive. Later, the Colyford Common Local Nature Reserve, North of Stafford Brook, was created. At this point in time we looked forward to eventually the whole of the estuary becoming a protected area for wildlife. To achieve to this end, representations have been made to have the area designated as a Site of Special Scientific Interest.

In 2007, East Devon District Council announced major plans to create a very large wetland reserve, comprising most of the area west of the Rive Axe between the A3052 at Colyford and Seaton.

A major step towards this goal was the acquisition of Black Hole Marsh and Stafford Marsh in 2008.  Working in partnership with the Environment Agency, the Black Hole Marsh saline lagoon was created through the installation of a prototype 'Self Regulating Tidegate'.

Between 2010 and 2015 a huge amount of infrastructure work was completed and 'Seaton Wetlands'  was born: ponds and reed beds were excavated to provide soil for screening banks and viewing mounds; on Colyford Common the hide was doubled in size and both the hide and the viewing platform were made wheelchair accessible; hedges, reed beds and willow coppices were planted; the Island Hide, Discovery Hut, Tower Hide, Reed Base, Pond Shelter and several view points were installed; the car park and various stone paths and boardwalks were put in; the Sand Martin Cliff and toilets and The Lookout were built and the cycleway was tarmacked, with the construction of the main bridge over the Stafford Brook completing the route through to Colyford.

​In 2021 there will be a new tram stop built at Swans Nest Loop and a new boardwalk will be put in at the south end of Colyford Common, joining up with the cycleway near the Sand Martin Cliff.

During the covid-19 lockdowns, Seaton Wetlands has become hugely popular, and a full time site Ranger will be appointed in the summer.

Sheeps Marsh, to the south of Seaton Marshes which has been owned by EDDC for several years is expected to be transformed into inter-tidal habitat in 2021/22, so there are exciting times ahead…